This is the fifth post in a series of 10 outlining the qualities I feel are the most important for success in practicing the martial way in the modern-day world...

Every martial artist has their own battles they fight. Has their own struggles they face. Emotionally, spiritually and physically, life can, at many times, be suffering. But it doesn't always have to be suffering. Many suffer because they feel they need to. They feel that if they haven't suffered they don't have a right to be happy. To an extent that is true; but their comes a time when you have to adapt instead of suffer.

I run a martial arts class every Wednesday night. I have a slew of students in the classes I help my own sensei run, but during this Wednesday night I have three students, specifically, who come out of their way to train with me. Others come and go, but these three are some of the most dedicated karateka I have seen in my 16 years in the martial arts.

Each one has their own physical traits that enable them to perform some techniques very well. Each one also has physical traits that inhibit their movements, or their capability in certain areas of the martial arts. One student in particular...this student is 5'1". She is a sophomore in high school and has not yet come into her own in regard to her physical ability - but you wouldn't be able to tell that watching her perform a kata or kick you in the face during a sparring match (and you're taller tan 6').

However, her height keeps her from being able to make effective throws like the rest of the class. She wasn't able to execute the moves correctly, and she suffered. I could see her mentally berating herself for not being able to throw me like the other students do. This became apparent last night. So after class, just the two of us went out on the mats and she proceeded to try to throw me without much success.

Then, suddenly, it was as if a light bulb came on over her head - like when Wile E. Coyote gets an idea about how to catch the Roadrunner. "Let me try this." BOOM! I hit the mat harder than when most 40-year-old, 200-pound men throw me.

I looked up at her in amazement and excitement. "Do that again!"

She proceeded to throw me at least 10 times on each side. All she did was take a component of the arts she had learned earlier in her training and apply it her current situation. It was as simple as picking one leg up off the ground. She had found her stride. She adapted. She got creative. And I was inspired (I wasn't going to list creativity until #7, but this prompted an earlier post, for obvious reasons)

Albert Einstein once said “The definition of insanity is doing the same thing over and over again and expecting different results." This student proved her undeniable sanity. She also proved that she was smarter than Wile E. Coyote - her idea worked! 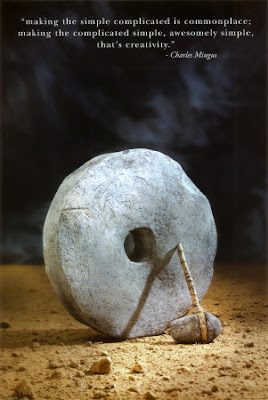 Posted by A Philosophical Martial Artist at 9:11 PM