This is the third post in a series of 10 outlining the qualities I feel are the most important for success in practicing the martial way in the modern-day world...

The ability to persevere, to push through the odds, to overcome the obstacles, to drill into your muscle memory through constant repetition...this is a cornerstone, both physically, mentally and spiritually, in the martial arts. All the other qualities martial artists hold dear - strength, agility, quickness, and countless others - all of these stem from this one source. Without perseverance, without constant practice, these skills cannot be honed.

When I think of perseverance, one of the images that comes to mind deals with repetitive action: line drills up and down the floor; practicing that kata over and over; sparring bout after sparring bout, etc. Another image I get is pushing past the boundaries, going further than one has before - that's the only way we get better.

So when that instructor makes you stand in a horse stance for an extra 10 minutes or takes you up and down the floor a few more times, remember that through this repetition, through pushing past your initial limits, you will only become a better martial artist.
Posted by A Philosophical Martial Artist at 9:58 PM No comments:

I just read through the last post and realized I only addressed the physical side of restraint. So much more goes into that quality than its physical aspect. Restraint can be looked upon as a quality in one's personality, in how one interacts with others, and in how one goes through daily living.

Confucius' Golden Mean, or the Buddhist Middle Way, preach that "Everything should be done in moderation." - the modern addition to that is "including moderation." While banal, it holds true. To give an example: my generation grew up with videogames. In our earliest years, it was Atari. Then Nintendo came along, then SEGA. Now we have X-Box 360, Playstation 3 and the Wii dominating people's daily lives, not to mention online gaming. Put candidly, for my generation this was a way of life. Kids played videogames for hours on end, myself included. We lost track of the days and nights sitting in front of televisions and computer screens, losing ourselves to the addiction that was (and is) gaming. In and of themselves, videogames are not all bad. Taken in moderation, when their usage is restrained somewhat, they can be a nice mindless distraction, similar to sittin in front of the television and watching your favorite reality show. The problem arises when people begin to lose themselves in the game and spend whole days and nights doing nothing else. People lose perspective on the real world and all the wonders it holds. Exercise restraint with videogames, and you won't lose perspective.

When dealing with others, we must restrain ourselves from saying everything that crops up into our heads. If we said everything we wanted the world would be a bit more of a chaotic place. Thus another reason I admire the ancient Japanese culture. They have a social philosophy called honne and ta 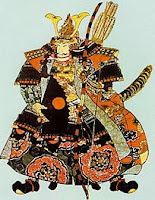 temae. Honne refers to a person's true feelings and inner desires. Tatemae, literally meaning facade, is a person's public behavior. Japanese custom dictates that a person's honne must be kept secret, only revealed to those closest, such as a spouse. That is the ultimate form of restraint, and one we as Americans, and I think much of the rest of the world (modern Japan included), have shunned in favor of letting our feelings shine through to reveal who we truly are within.

Nonetheless, many times it is better to let a slight roll off our shoulders, per se. By exercising restraint we are also exercising humility.

-J
Posted by A Philosophical Martial Artist at 12:01 AM 1 comment: